Taking a Walk After a Meal Aids Digestion

For many people, the food-induced stupor that often follows a big meal is a good excuse for a nap. But for some, a brief walk shortly after eating is a quick way to burn some calories and aid digestion.

Over the years, researchers have found that a post-meal walk, as short as 15 minutes, can in fact help with digestion and improve blood sugar levels. In one study in 2008, German researchers looked at what happened when people ate a large meal and then consumed either an espresso or an alcoholic digestif — like brandy or flavored liqueur — or walked at a slow pace on a treadmill. Walking, they found, sped the rate at which food moved through the stomach. The beverages had no effect.

In other studies, researchers have found that walking has a significant effect on blood sugar after meals. Blood sugar typically rises and then falls after eating, but large spikes and variations can raise cardiovascular risk and potentially signal diabetes.

In a study published in 2009, researchers found that a 20-minute walk about 15 minutes after dinner led to lower post-meal blood sugar levels in people with Type 2 diabetes than either a walk before dinner or no walking at all. Another study, published recently in Diabetes Care, found that in older adults who were overweight and sedentary, walking for 15 minutes shortly after each meal improved daily blood sugar levels to a greater extent than a single 45-minute walk in the morning.

Researchers say that a post-meal stroll helps clear glucose from the bloodstream in part because more of it is taken up by the muscles.

Heading for a brief walk, instead of the couch, about 15 minutes after a meal may improve digestion and blood sugar control.

To many people, “geek” and “nerd” are synonyms, but in fact they are a little different. Consider the phrase “sports geek” — an occasional substitute for “jock” and perhaps the arch-rival of a “nerd” in high-school folklore. If “geek” and “nerd” are synonyms, then “sports geek” might be an oxymoron. (Furthermore, “sports nerd” either doesn’t compute or means something else.)

In my mind, “geek” and “nerd” are related, but capture different dimensions of an intense dedication to a subject:

Or, to put it pictorially à la The Simpsons: 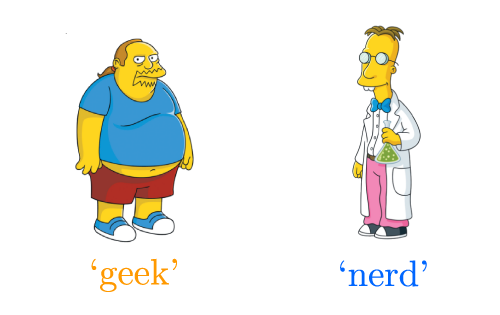 END_OF_DOCUMENT_TOKEN_TO_BE_REPLACED

Generally speaking—in the United States, at least—you can drink from the tap without any risk to your health under most circumstances. If you choose to buy water, you should do so because you prefer the taste or because you fall into a small group of people who put themselves at risk by drinking tap water (more on this later). For the most part, the water from your faucet will serve you well.
END_OF_DOCUMENT_TOKEN_TO_BE_REPLACED

Any fool can criticize, condemn, and complain

Any fool can criticize, condemn, and complain – and most fools do