A few months ago I was driving with my son-in-law to the airport. This young man had just received an excellent job offer from a premier employer. As we sat in the car he asked me a very difficult question: “After all your years of teaching and coaching people across the world, what is the one thing you would tell someone that would make them more successful in their career?” It would have been much easier to list 10 things, but to focus in on just one suggestion made this a difficult question indeed. After a bit of contemplation I answered, “The ONE piece of advice I would give is this: Become an expert at asking for and acting on feedback from others.”

Why is feedback so important?

Feedback is essential for development because everyone has blind spots.There are certain characteristics most individuals just don’t see. While many assume that bosses or co-workers only notice weaknesses the fact is that many can also point out strengths. Feedback is the most instructive tool to help people understand others’ perception of them, and there is significant power in the process.

Ask any employee if they have ever had a traumatic experience in giving or receiving corrective feedback back and most will say “yes!” These negative experiences embed themselves into our psyche and become a source of anxiety. In recent years neuroscientists have examined what happens to people when they get negative or corrective feedback. It is similar to how a cave man would react to a tiger. The three most common reactions are fight, flight or freeze. If people react the same way to feedback, fight (e.g., resist, react and debate), flight (e.g., avoid or ignore) or freeze (e.g., do nothing) they will get no value out of the feedback. Even though the feedback may be very useful and accurate these negative reactions make it impossible for a person to get any good use of the value feedback holds for personal growth and development.

However, most people can also come up with an experience where a person gave them feedback that contributed to a marked improvement in their effectiveness and influenced their success. The feedback came forward in a way that was not threatening and the person receiving the feedback was not afraid. For effective feedback, the person giving needs the right skills and the person receiving needs the proper attitude. Whether feedback is critical or positive it is a gift. But in order for the gift to be effective and valuable lies in the giver’s and receiver’s approach.

Don’t Wait for it; Ask for it

One suggestion that is incredibly helpful (and usually increases the probability feedback will be accepted) is to have people ask for feedback. We all remember feedback ambushes from bosses who delivered feedback suddenly and in a threatening way. Typically our reactions were fight, flight or freeze. By having people ask more often for feedback, we inherently set them up to receive. It is also helpful to get feedback often, and not reserve it for year performance appraisals. The advantage of ongoing feedback is much like the advantage you gain from a GPS device as opposed to a paper map. Both provide directions about where you want to go. The GPS, however, provides the directions in the context of an accurate assessment of where you currently are. The GPS also uses four satellites to determine that location. Likewise, feedback should come from multiple sources to be accurate. Be confident, and continually ask your boss, your peers, and others around you for feedback.

I believe that doing this “one thing” can have quite an impact on a career. In fact, it is paramount. The graph below shows the correlation between a leader’s skill at asking for feedback and their overall leadership effectiveness rating from others. 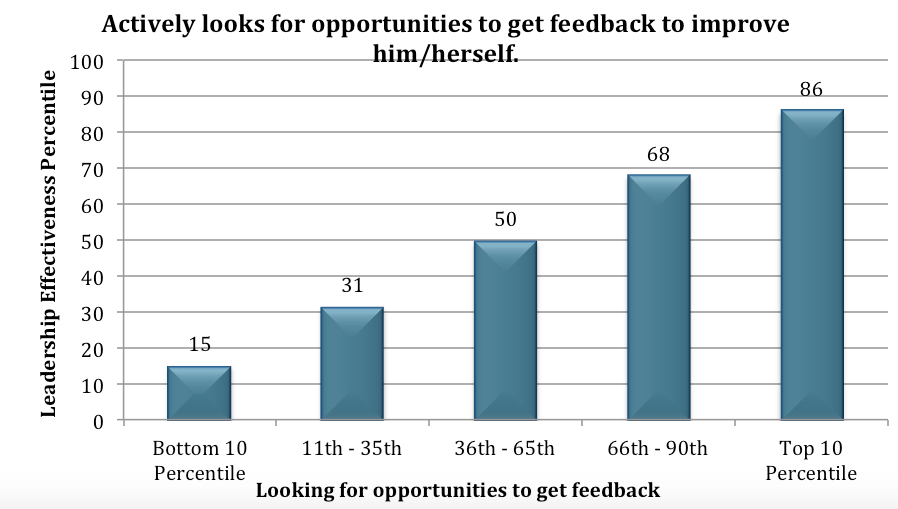 Consider this: the way others view you is much better than the way you view yourself. We don’t spend countless hours looking in the mirror, but others spend countless hour looking at us. Being open to the observations of others by soliciting their feedback will provide you with a secret weapon to build your effectiveness and make you more successful. Sometimes their observations are wrong but often they are full of great wisdom and insight. Your job is to keep the information flowing, evaluate and validate their observations and learn.