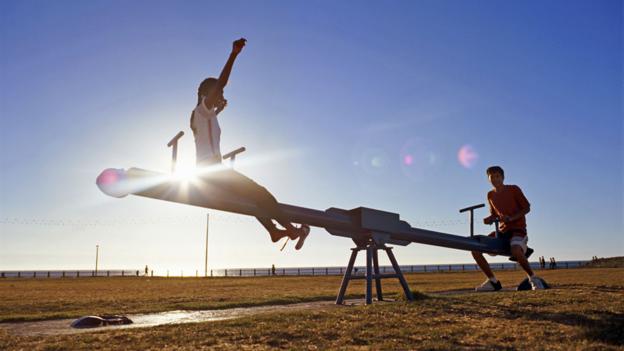 It stings when life’s not fair – but what happens if it means we profit? As Tom Stafford writes, some people may perform unexpected self-sabotage.

Frans de Waal, a professor of primate behaviour at Emory University, is the unlikely star of a viral video. His academic’s physique, grey jumper and glasses aren’t the usual stuff of a YouTube sensation. But de Waal’s research with monkeys, and its implications for human nature, caught the imagination of millions of people.

It began with a TED talk in which de Waal showed the results of one experiment that involved paying two monkeys unequally (see video, below). Capuchin monkeys that lived together were taken to neighbouring cages and trained to hand over small stones in return for food rewards. The researchers found that a typical monkey would happily hand over stone after stone when it was rewarded for each exchange with a slice of cucumber.

But capuchin monkeys prefer grapes to cucumber slices. If the researchers paid one of the monkeys in grapes instead, the monkey in the neighbouring cage – previously happy to work for cucumber – became agitated and refused to accept payment in cucumber slices. What had once been acceptable soon became unacceptable when it was clear a neighbour was getting a better reward for the same effort.

The highlight of the video is when the poorly paid monkey throws the cucumber back at the lab assistant trying to offer it as a reward.

You don’t have to be a psychologist to know that humans can feel very much like the poorly paid monkey. Injustice stings. These results and others like them, argues de Waal, show that moral sentiments are part of our biological inheritance, a consequence of an ancestral life that was dominated by egalitarian group living – and the need for harmony between members of the group.

That’s a theory, and de Waal’s result definitely shows that our evolutionary cousins, the monkeys, are strongly influenced by social comparisons. But the experiment doesn’t really provide strong evidence that monkeys want justice. The underpaid monkey gets angry, but we’ve no evidence that the better-paid monkey is unhappy about the situation. In humans, by comparison, we can find stronger evidence that an instinct for fairness can lurk inside the psyche of even the most competitive of us.

The players in the National Basketball Association in the USA rank as some of the highest earning sportspeople in the world. In the 2007-08 season the best paid of them received salaries in excess of $20 million (£13.5 million), and more than 50 members of the league had salaries of $10 million (£6.7 million) or more.

The 2007-08 season is interesting because that is when psychologists Graeme Haynes and Thomas Gilovich reviewed recordings of more than 100 NBA games, looking for occasions that fouls were called by the referees when it was clear to the players that no foul had actually been committed. Whenever a foul is called, the wronged player gets a number of free throws – chances to score points for their team. Haynes and Gilovich were interested in how these ultra-competitive, highly paid sportsmen reacted to being awarded free throws when they knew that they didn’t really deserve them.

These guys had every incentive to make the most of the free throws, however unfairly gained: after all, they make their living from winning, and the points gained from free throws could settle a match. Yet Haynes and Gilovich found that players’ accuracy from unfairly awarded free throws was unusually low. It was down compared to the free throw league average, and down compared to the individual players’ free throw personal averages. Accuracy on unfairly awarded free throws was lowest when the player’s team was ahead and didn’t need the points so much. But tellingly, it was also lower than average when the team was behind and in need of points – whether honestly or dishonestly gained.

If players in one of the most competitive and best-paid sports can apparently be put off by guilt, it suggests to me that an instinct for fairness can survive even the most ruthless environments.

At the end of the monkey clip, de Waal jokes that the behaviour parallels the way people have staged protests against Wall Street, and the greed they see there. And he’s right that our discomfort with unequal pay may be as deeply set as the monkey’s.

Yet perhaps these feelings run even deeper. The analysis of the basketball players suggests that when we stand to benefit from injustices – even if they can help justify multi-million dollar salaries – some part of us is uncomfortable with the situation, and may even work to undermine that advantage.

So don’t give up on the bankers and the multi-millionaire athletes just yet.