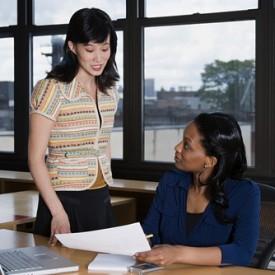 Let’s face it: Bosses aren’t perfect. And sometimes, they need to know it. Whether your manager’s long, personal-story-filled team meetings are preventing everyone from getting work done or her daily screaming matches are putting your relationships with other departments at risk, sometimes you need to share some constructive feedback with your boss.

And when you do, it can be pretty daunting. Take the obvious fear of retaliation for telling her something she didn’t want to hear and add the unintended consequences of being perceived as a complainer, and you have a tough cocktail to swallow.

But scary as it may be, there are some steps you can take to be sure that any feedback conversation is both diplomatic and productive.

I’ve noticed over the years, people seem much more comfortable sharing their opinions than they did when I first started out—which can be a good thing. But, as a result, people sometimes say things that may have been better left unsaid, or at least, should’ve been said in a more diplomatic way.

When I first started out as a manager, I had one such employee. He was bright, and a great worker, so I often appreciated his candor as it related to day-to-day problem-solving. But, when he cornered me in front of the whole team and told me I was going about a task incorrectly, I was stunned. In an instant, he had destroyed my credibility with the team (not to mention shattered my confidence).

Worse, when I pulled him aside later to discuss, it turned I wasn’t doing anything wrong, just different from how their old manager had. Over time, we both recognized that my approach worked just as well, but it took months to repair the damage to my confidence and my authority. The price of that comment was pretty high, with little to no benefit.

While feedback is important for both of you, take the time to consider whether your input truly needs to be delivered, how sharing it will impact your manager, and whether that information will end up helping—or hurting—you in the long run. As they say, pick your battles. Deliver the feedback you really think your boss needs to hear—and do it the right way.

Telling your boss she’s not meeting your expectations is scary, so don’t rely on your improv skills to carry you through this type of discussion. Instead, take time to collect and write down your thoughts.

The first time I approached a manager about an issue I was having with his performance, I thought I could just wing it, and didn’t bother to jot down any notes. About 30 seconds into the conversation, I deeply regretted that oversight. First of all, my boss wasn’t expecting to receive feedback from an employee outside the annual review season, so I was immediately caught up in trying to explain myself and why we were there. By the time I’d stumbled through an explanation, I was so tongue-tied and nervous that I ended up just blurting out everything that bothered me about him. Needless to say, that conversation did not go well.

Jot down a few general areas of concern, focusing on issues you think are truly critical to address, and any supporting details that will help spark a productive discussion—the frantic phone calls you get from her boss when she’s 10 minutes late to a meeting, for example. Then, stick to the script. While it may be tempting to pile on every little pet peeve, if it isn’t in your notes, don’t bring it up. Keep the discussion focused on the topics you’ve prepared to address, and save the little stuff for another time. If it wasn’t important enough to make it into your notes, it can wait.

Also, never send these notes to anyone via email, just write them down the good old-fashioned way, and shred them when you’re done. Unless there’s a serious problem, no one needs to know about this but you and your boss, and respecting his or her privacy on the matter will assure you both can address the issue without any unwanted input from your colleagues.

As important as preparing what you’ll say is spending time thinking about how you’ll say it. The way you begin this interaction will set the tone for the entire discussion, and can mean the difference between a productive conversation and a, well, terrible one.

Bottom line: Keep it classy, professional, and kind. When dealing with your bosses, it can be easy to forget they’re human, too, and assume their skin is impervious to criticism—but trust me, it’s not.

Rather than simply telling your boss point-blank, you think she’s doing something wrong, approach her privately and ask if you could schedule some time to chat. Then, let her know what you’d like to discuss in general terms—for example, if she’s habitually late for morning meetings, tell her you’d like to get her thoughts on the morning meetings. By giving her the right context, you’ll give her a chance to start mulling over how to improve the situation—and might even inspire her to address her tardiness before you have to. But, even if you do have to bring it up directly, by maintaining your professionalism, you’ll help ensure your feedback is heard in a constructive setting.

Remember, this is not a free pass to unload on your boss, rather, it’s an opportunity for you to show how you handle a particular situation or how specifically you can both work better together. After all, that’s what you’re trying to achieve.

Be Wary of Solicited Feedback

Finally, a warning on solicitations of feedback from your boss: This may seem counterintuitive—if she actually asks you for feedback, that means she wants to hear out all your thoughts, right? Well, that’s only partially true. If you ask your significant other how you look in those jeans you just bought, part of you wants an honest answer, but the other is hoping for a glowing review. It’s not so different with your boss.

That first time a boss asked me for feedback, I didn’t realize she was trying to get answers to a few specific questions, rather than my general input on how she was doing. She had just had a review with senior management, and they felt her team needed more guidance on a particular product offering, so she was speaking to the entire team to get a sense for how comfortable they felt with the information she’d provided. She did not, it turned out, want to know I found her habitual tardiness and long lunches demoralizing.

If a manager comes to you for feedback, make sure you’re both giving her what she wants and having the discussion on your own terms. For example, if your boss pops by your desk and asks how you think she’s doing, tell her you appreciate the opportunity to share your thoughts, and ask her to go into more detail about what she’s hoping to learn.

Then, when you have a better idea of what she’s after, try to schedule a specific time to talk, so you’ll have time to think through your answers. Trust me, it’ll be a better, more productive conversation for both of you. Also, recognize that if you’re planning on bringing up any criticisms, you should be going through steps 1 through 3 above. Just because your boss asked for the feedback doesn’t mean you should skimp on the preparation—and just because she asked how she’s doing managing the project does not mean she wants to hear she’s screwing it all up.

Sharing feedback with your boss takes a lot of thought, preparation, and empathy—this is not something you approach lightly. But, with careful planning, you can still give your manager the feedback he or she needs to help both of you succeed.