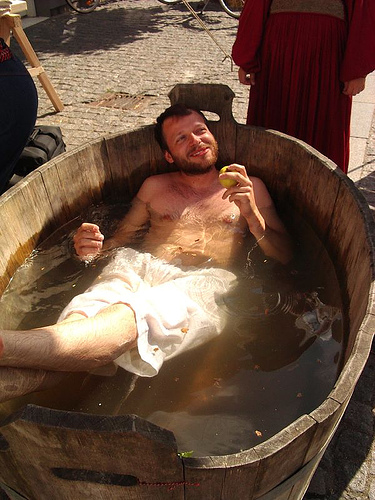 Today I found out that why bathing was uncommon in Medieval Europe.

Before the Middle Ages, public baths were very common, as was the general public regularly taking time to bathe in one way or another. Even during the 4th and 5th centuries, Christian authorities allowed people to bathe for cleanliness and health, but condemned attendance to public bath houses for pleasure and condemned women going to bath houses that had mixed facilities. However, over time, more and more restrictions appeared. Eventually, Christians were prohibited from bathing naked and, overall, the church began to not approve an “excessive” indulgence in the habit of bathing. This culminated in the Medieval church authorities proclaiming that public bathing led to immorality, promiscuous sex, and diseases.

This latter “disease” point was very common; it was believed in many parts of Europe that water could carry disease into the body through the pores in the skin. According to one medical treaty of the 16th century, “Water baths warm the body, but weaken the organism and widen pores.  That’s why they can be dangerous and cause different diseases, even death.”  It wasn’t just diseases from the water itself they were worried about.  They also felt that with the pores widened after a bath, this resulted in infections of the air having easier access to the body. Hence, bathing became connected withspread of diseases, not just immorality.

For most lower class citizens, particularly men, this resulted in them completely forgoing bathing.  During this time, people tended to restrict their hygienic arrangements to just washing hands, parts of the face, and rinsing their mouths. Washing one’s entire face was thought to be dangerous as it was believed to causecatarrh and weaken the eyesight, so even this was infrequent.

Members of the upper classes, on the other hand, rather than completely forgo bathing, tended to cut down their full body bathing habits down to around a few times per year, striking a balance between risk of acquiring a disease from the bath vs. body stench.

This wasn’t always the case though.  As one Russian ambassador to France noted “His Majesty [Louis XIV] stunk like a wild animal.”  Russians were not so finicky about bathing and tended to bathe fairly regularly, relatively speaking, generally at least once a month.  Because of this, they were considered perverts by many Europeans.  King Louis XIV stench came from the fact that his physicians advised him to bathe as infrequently as possible to maintain good health.  He also stated he found the act of bathing disturbing.  Because of this, he is said to have only bathed twice in his lifetime.  Another in this “gruesome two-some” class among the aristocracy was Queen Isabel I of Spain who once confessed that she had taken a bath only twice in her lifetime, when she was first born and when she got married.

To get around the water/disease and sinful nature of bathing, many aristocrats during the Middle Ages replaced bathing with scented rags to rub the body and heavy use of perfumes to mask their stench. Men wore small bags with fragrant herbs between the shirt and waistcoat, while women used fragrant powders.

Amazingly, this complete lack of personal hygiene in most of Europe lingered until around the mid-19th century.