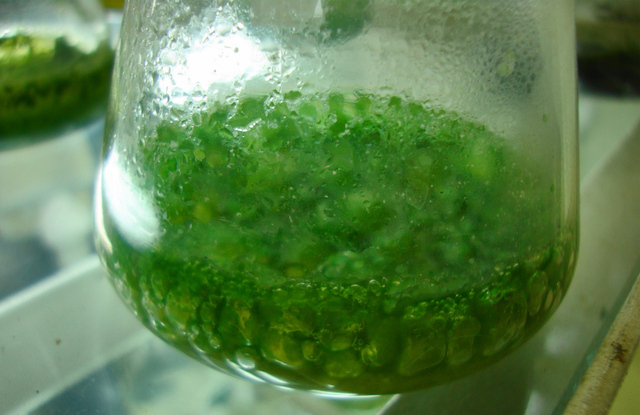 It’s stiffer than Kevlar, thinner than paper, and in a few years, it may be mass-produced using only sunlight and water.

Scientists in the US this week announced a new, and potentially groundbreaking method for producing nanocellulose — a so-called “wonder material” derived from tree fiber that could be used to create ultra-thin displays, lightweight body armor, and a wide range of other products.

Dr. R. Malcolm Brown, a biology professor at the University of Texas at Austin, presented his team’s findings at an American Chemical Society conference in New Orleans on Sunday, heralding their progress as a major step toward “one of the most important discoveries in plant biology.”

At the core of Brown’s research is a family of bacteria that produce vinegar, Kombucha tea, and nata de coco. These bacteria secrete nanocellulose in a culture medium, though extracting the material at a large scale would require high volumes of sugars, nutrients, and fermentation tanks. Today, most non-bacterial nanocellulose is produced from compressed and homogenized wood pulp — a relatively inexpensive, but resource-heavy process.

These genetically-altered algae, known as cyanobacteria, are entirely self-sustaining. They produce their own food from sunlight and water, and absorb carbon dioxide from the atmosphere, offering a natural way to reduce the world’s most pernicious greenhouse gas.

The team is currently working on synthesizing a more complete and stable form of the material, though their progress is already promising. If scaled up, Brown’s method could have a dramatic impact across several sectors.

Cellulose is the most abundant organic polymer on Earth, forming a major component in tree trunks, dietary fibers, and cotton. Nanocellulose shares some similar properties, though it’s notably more versatile — lightweight, stiffer than Kevlar, and, under certain conditions, conductive.

Advances in genetic engineering have only expanded its potential. Last year, researchers in Finland created a nanocellulose aerogel with an incredibly high buoyancy. According to the scientists, a one-pound boat made of this substance would be able to carry up to 1,000 pounds of cargo.

Brown says bacterial nanocellulose can also be used to create ballistic glass, aerospace materials, or even wound dressings, due to the fact that it retains its stiffness and strength even when submerged in liquid. But perhaps its most obvious application would be in the paper and display industry.

At a press briefing Sunday, Brown said he and his team have begun adding electrochromic dye to the cellulose to create an electronic display. “I see this as a major development,” he said, noting that its thin and flexible qualities make it ideal for electronic wallpaper, as well.

“It certainly won’t replace or supplant the forest and paper industry, but it could supplement it,” Brown said in an interview with The Verge, adding that his technique, if widely adopted, could help reduce deforestation.

Brown’s lab is still “five to ten years” away from adapting the process to a large scale, though he says the science behind it is sound. All they need now, the professor explains, is broader awareness and momentum.

Last year, the US Forest Service opened the country’s first nanocellulose production facility in Wisconsin, in an effort to take the lead in renewable nanomaterials. After devoting 40 years to nanocellulose research, Brown hopes that his latest developments will encourage similar investments.

“We need to have more funds in this area,” Brown told reporters. “So having the chance to tell the world more about this new microorganism will, I think, help tip the funding. I hope so.”